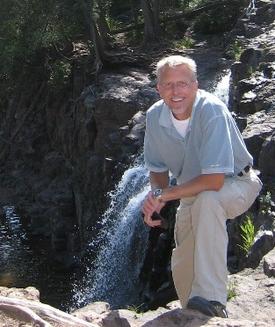 "Kids with a soft spot for Indiana Jones-style adventure will eat up the book."

Andreas Oertel   AKA "The Tallest Writer in Canada"

Andreas was born in Germany, but lived most of his life in Canada. He's travelled all over the world and had a hundred different jobs -- everything from rickshaw driver to health inspector -- but his favourite occupation is writing.

His middle grade fiction is critically acclaimed and has been nominated for several awards (Silver Birch Award, Manitoba Young Reader's Choice Award, Charlotte Award). Andreas spends much of his free time visiting schools, and in 2012 and 2013 he was Writer in Residence at Lac du Bonnet's Centennial School.

Andreas enjoys movies, and books, and traveling, and being outside. He lives with his wife Diane next to the Lee River, which is a little bit east of back-of-beyond, in Manitoba, Canada. And if you're ever strolling along a beach and see a lanky man with a metal detector, that's probably Andreas -- still a kid at heart, and still dreaming of finding meteorites and lost treasures.